"MUSIAD will make a huge contribution to further expansion of trade in both countries and in the region," Asmali said.

During the meeting with the participation of members of the board of MUSIAD and Chairman of the Chamber of Commerce and Industry of Uzbekistan Vakhaboz Abdujalolovich issues of cooperation were discussed. A meeting was also held with members of MUSIAD Uzbekistan.

The delegation of MUSIAD visited historic sites and the Minor Mosque in Tashkent, Uzbekistan. 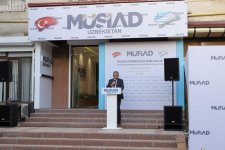